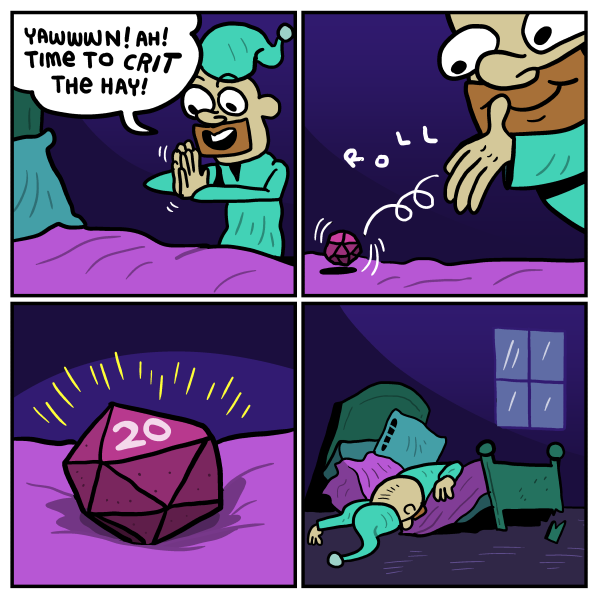 Last time I played D&D, a friend wanted to use Shocking Grasp as a little prank on an NPC. Unfortunately, he rolled a nat 20, killing the prankee and two bystanders. Funniest application of a joy-buzzer ever. Crits rule.

Oh wow, Bo Burnham continues to demonstrate that he’s working within and without the music industry with this definitive take on his internal conflict. The pop-savvy tongue twister of “Words, Words, Words” mashes its self-aware chorus with “Art Is Dead’s” forthright, cynical sadness. Outright comparing the industry to Satan was the only logical next step– and fuck yeah, he did it.

As a performer, Bo also manages to pull off something rare in comedy: he believes he’s seeing through the veil and we aren’t, but we don’t feel like morons listening to him. Sure, he throws in self-deprecation, but that’s a necessity. There’s just no condescension. Only the best can grapple with smash-the-state topics without repulsing the audience.

(best shot in a music video ever, pun intended)

According to this recent New York Times bit, Grimes released this song (originally written for Rihanna) and received such a backlash from her fans that she scrapped her whole upcoming album and returned to the drawing board. And honestly, while she should have the conviction to plow ahead, I’m mad disappointed in those fans. Her tumblr (which is a pro fucking click, I mean, apart from all the interesting content from someone else who grew up on the internet, take a look at the cute lil Adult Cat Finder pop-up in the bottom right!) makes her wide sources of inspiration so clear– she loves Korean pop and hip-hop, and the vibe is sprinkled across “Go”– that it’s upsetting such a strong voice would be waylaid by whiny scrubs who want more of the same rather than risks.

On top of all that, this is a banger, and if her whole upcoming album sounded like this I would find it a major, fun step forward for her sound.

Plus the single art is the sickest, like I can feel my digestive system shutting down just gazing at it: 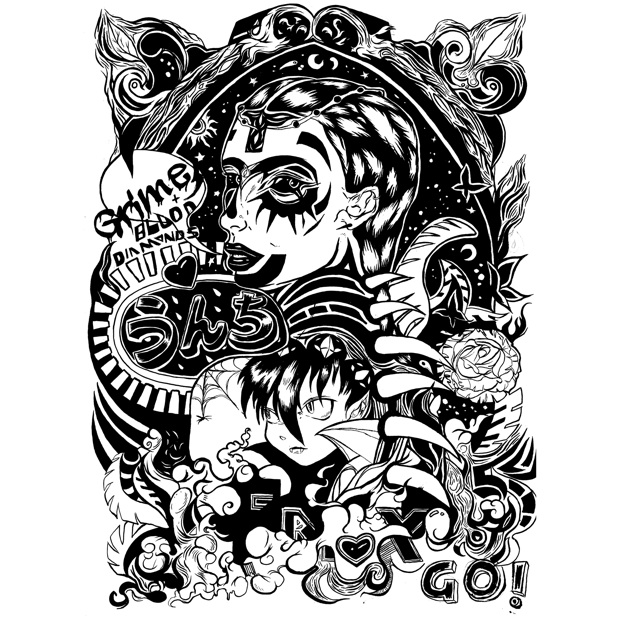 Here we are, “Feminism vs. Truth.” This’ll settle the argument once and for all. I’m sick of all the bullshit, I’m sick of dancing around the matters and hand-wringing and hiding. Let’s get down to brass tacks. Our host, Christina Hoff Sommers, claims truth as her own. A truth is an unquestionable statement. Stands to reason that if something is truly true (hehe) that all opportunities to assail it for more understanding fail: it is the total sum of understanding that you need.

That sounds really difficult to construct! Truth is tough! Let’s see if she lives up to her own standards:

“Feminists hardly acknowledge women’s progress.” (0:41)
Er, sorry to interrupt so early, but this doesn’t quite ring true for me. Must progress of a movement necessarily be acknowledged by its participants? And how does Christina know how women think and feel? Could those women be making a decision to not crow about success (as we [but especially women]) are all taught to do from a young age)? What ideologies have come out looking better for trumpeting their achievements? Are you telling women to be less humble? But I thought that women aren’t humble enough, considering their bullying push to install the matriarchy and force men to lactate? What about the many remarkable women throughout history that feminists have introduced me to? I often see feminists sharing and promoting stories like theirs since those feminists know that the alternative, tearing down the opposition, is divisive, intimidating and counter-productive, right? And why am I having such trouble believing this initial truth is true?

“The fact that most women reject [the] activist brand of feminism and think of themselves as free is, for this crowd, proof of just how entrenched patriarchy and inequality truly are.” (0:46)
So the alternative is convincing people that they should feel free, even if they viscerally do not? But what if someone really isn’t free and you keep telling them that they are? That sounds more like obscuring some truth rather than revealing it… How about this: everyone should always be defensively assessing their own freedom for the sake of engaging with the world critically + objectively as well as protecting the self. So if we know Sommers’ Truth team demands folks care less about their freedom, I guess I’d rather be with the opposition.

“Take the case of doctors: on the surface, it looks like female physicians are clearly victims of wage discrimination.” (2:24)
“There are exceptions, but most workplace pay gaps narrow to the point of vanishing when one accounts for all of these relevant factors.” (3:03)
Now I’m getting really confused! Cause it sounds like she’s trying to tell me that women and men are equal, but then she says that, even considering exceptions, most workplace pay gaps only narrow to the point of vanishing. She doesn’t say workplace pay gaps are extinct. But if pay gaps for identical labor exist to any degree, we can’t say people are equal, right? And is she not arguing for equality? rrgrghhh but truth cannot be lie, brian head place stings

“But is it really social conditioning that explains women’s vocational preferences and their special attachment to children? Perhaps, in the pursuit of happiness, men and women take different paths.” (3:51)
So if the difference between genders is not conditioning then men and women are inherently different and the conclusion we come to is that men must simply be superior than women, otherwise how would men have held power for so long? And does this mean that my own affinity for kids and interest in less traditionally-masculine professions was genetically determined? Perhaps, in the pursuit of happiness, every single person in the world takes their own unique path and it’s not exactly valuable to compare and contrast and perhaaaaaaps it’s more important to make sure that everyone is equally able to follow their path to the best of their abilities? JUST SPITBALLING HERE

“And isn’t it more than a little patronizing to suggest that most American women are not free, are not self-determining human beings?” (4:00)
“The more elite the school, the more advanced the degree, the more likely they are to take such feminist propaganda seriously.” (4:50)
If it is patronizing for women to tell others that they’re being oppressed and they don’t even know it, is it not just as patronizing to suggest that the most well-off women in the country are not self-determining and exercising their own freedom when they accept feminist ideology as their own? Alternatively: *FARRRRRRT*

“And here is common-sense proof that the male-female wage gap is untrue.” (4:06)
Oh, finally, we’re getting to something she expressly tells me is ironclad, unquestionable, perfect (and even common-sense!) truth. I’m so excit— “If it were really true that an employer could get away with paying Jill less than Jack for the exact same work, wouldn’t most employers fire as many of their male employees as possible and replace them with females and enjoy a huge market advantage?”
What if men prefer working with men and so tend to hire men more? Could it be that men don’t know how to kick it with women on a platonic level because we’re driven to excise all that we would have in common for fear of being seen as a gender we aren’t? What if women are still seen as less effective in all arenas, meaning they’re less likely to be hired than men? What if men fear hiring women because they fear women in the first place, since you seem so determined to convince us that women are over-reaching? What if these decisions aren’t all about money and can’t be rationalized down to your own need for greed, Sommers? What if the point you extol as the most obvious, evident truth in your entire video raises this many questions in five minutes from a moron like me? Maybe…. It isn’t…. Truth……….?

I’m not picking this apart because I found her thoughts grievous or refreshingly progressive in their regression (god, if only). It’s more that, no matter which side you take, you better not believe you’re contributing anything to discourse by consuming and parroting propaganda like this. There’s nothing new here, nothing interesting, it sums up the argument against the pay gap that has existed in the same perpetuity as the supposed myth itself. Considering that there isn’t one truth to be found in the entirety of “Feminism vs. Truth,” how can you call it anything other than propaganda? I’ll take some stabs: it’s fluff, it’s Buzzfeed, it’s debating philosophy with a friend for fun and forgetting about it the next day. Don’t trust Christina Sommers, don’t trust Prager University, don’t trust six minute Youtube videos claiming any sort of truth given that countless people, all way smarter than you and I, have driven themselves mad striving for the same.

And definitely don’t trust me.

I sick of Isaac (but not really)

In one remarkable case, a participant in an antidepressant drug trial was given placebo tablets — and then swallowed 26 of them in a suicide attempt. Even though the tablets were harmless, the participant’s blood pressure dropped perilously low.

Interesting that if some haute boutique was selling this it would be a violent, provocative reminder to stand up against national authority. #solidarity

Chainsawsuit reveals what actually happened when Calvin grew up.

I haven’t done much music writing lately (or side writing at all, pretty occupied by stand-up, sketches and other assorted projects). But according to my GPS I drive more than 99% of all Californians, so right now my life lends itself pretty well to burning through lots of music. Everything from doom metal to vaporwave, whether 50 years old or releasing tomorrow.

And even if I’m not writing about the music, I’m still cataloging it for my personal pleasure and ease of access month-to-month. (I’m at the point where I risk forgetting about a magical song because of all the magic I’ve already heard. It’s a weird moment when you’re bumping your head to the beat from the H&M speakers and think “oh yeah I really love this song and it vanished from my memory.”) You can reap the rewards of my organization on Spotify yourself if you click over to my profile.

I’m Tryna Listen is the daily playlist of new songs for me to listen to. I try and update it every time I drive. It’s stocked with 50-100 tracks at any given time.

I’m Tryna Rly Like are songs that have graduated from the fresh listening playlist, selected because they caught my ear. These will most likely make it onto that month’s playlist. This is namely so I can keep a separate playlist of 10-20 bangerz available offline and reserve most of my phone memory space for the listening list.

Then you’ll see the monthly playlists, (like August 2014, embedded above) which are thrown into a somewhat acceptable order of listening before being finalized. These are the songs from that month that I want to remember.