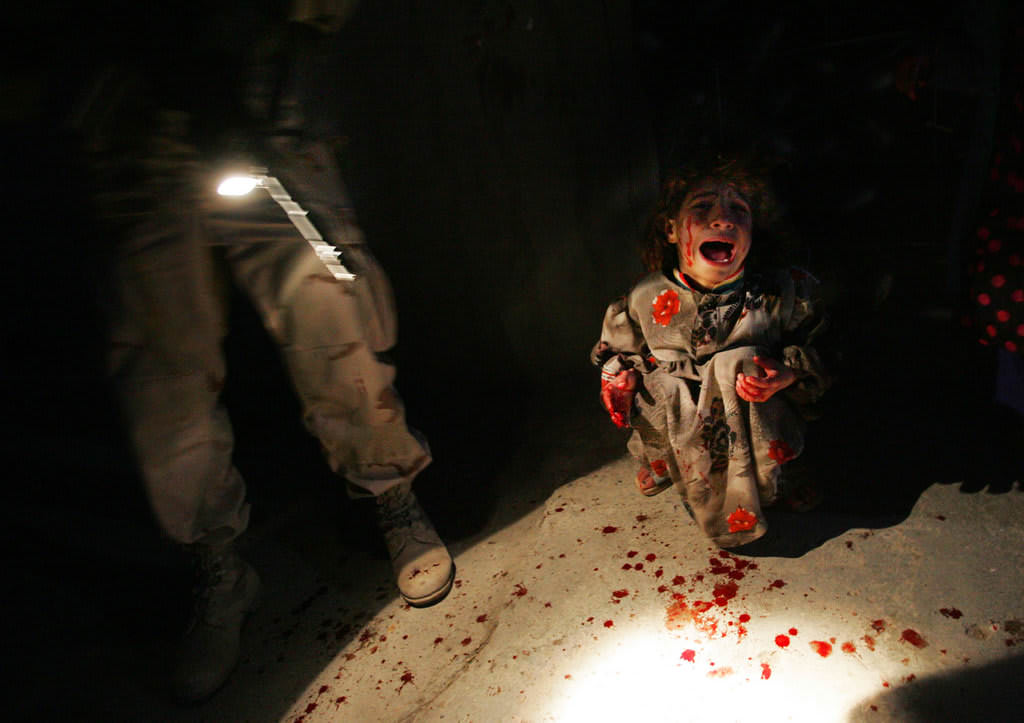 (I’m going to lift the point of this essay wholecloth, so you really should read it.)

On a week seeing attempts at rehabilitation of war hero (as in he’s a hero to wars for always supporting them) John McCain and candy-man George W. Bush, I was lucky enough to read about Samar Hassan. She’s pictured above. During the Iraq war, her parents were gunned down in front of her because dad was thought to be a suicide bomber. He was driving a little fast, after all. The photo captures the immediate aftermath.

Samar Hassan was interviewed for a 2017 documentary. Then eighteen years old, she was asked how she would reply if men like McCain and Bush told her they were sorry. She says:

I will never forgive them. I will just leave it to God. God will punish them. If they were in front of me, I would want to drink their blood. Even then I wouldn’t be satisfied.

I’ve re-visited this essay about four times in less than a year and it still sees right through me. I spend a week alone and imagine myself the zen paragon of humankind. Then I head to a bar and speak to one other friend and the illusion crashes, the Matrix glitches: sure I can still re-direct bullets, but they tend to ping straight at loved ones.

Eliese wants to tell you a story. She wants to tell you a story, but there are so many things about which she cannot speak. Particle physics, for example. Also, industrial psychology, protein synthesis, polymer science, and the peculiar magic that makes water bugs skate so perfectly on a pond. She wants to tell you a story, but she lacks so many things. Multivariable calculus. Pie making. And there is so much she has forgotten. The conjugation of the verb vouloir, the purpose of a Golgi body, the middle name of her first boyfriend. Eliese does, however, know about horses. She can talk about horses. She knows equitation and conformation and equine disease. For example, Eliese knows that white horses must be bred with care. Sometimes, a white horse is born with a fatal genetic disorder known as lethal white syndrome. A foal with this disorder will appear healthy at birth. It will stand and suckle and sniff its mother’s scent. A new, white life. But deep inside the foal’s gut, something has gone wrong. Its colon has not formed properly. It cannot expel waste. These foals always die—either naturally and painfully over the course of a few days, or through euthanasia. A white, perfect body splayed dead on the straw. The violence of a harbored, hidden waste.

This is one that I’m not going to expound upon. It’s a story we’ve heard before but is new and deserving of our attention every time. It’s more-than-okay when a story other than my own conveys a “shut up and listen, for a rare shining moment, shut the fuck up, dude.”

One morning I got up feeling sullen, sad, disconcerted, and fatigued by idleness, with what seemed to be a desire to do some grand and radiant deed! And then I opened my window, alas!

The first person I noticed on looking out my window was a glazier, a glass-seller, the sharp discordance of his cries drifting up to me through the stale and heavy Parisian smog. It’s not possible for me to say why I was filled with such a sudden and tyrannical hatred for this poor man.

“Hey, hey!” I cried, motioning for him to come up. Not without pleasure did I reflect that my room was on the sixth floor and that he would climb those flights with difficulty, lest his fragile goods be damaged.
At last he appeared. With great curiosity I examined all of his panes and finally said: “What? You have no colored glass? No pinks, no reds, no blues, no magical panes? No panes of the gods? Impudent creature! You sell your wares to the poor, and yet you have no panes that are able to make life beautiful!” And I abruptly pushed him, groaning and stumbling, out to the stairs.

I then went out on my balcony and grabbed a small flowerpot; when the man reappeared at the door I let my engine of war fall right on the back of his pack, the reverberations from the impact sending him reeling. Falling on his back he managed to break all of his poor, portable merchandise with a crash akin to lightning striking a crystal palace!

Though such capricious endeavors are not without peril, and one must often pay dearly for them, what does an eternity of damnation compare with an infinity of pleasure in a single second?

A friend sent me this one. I told her I identified with the last line, she told me it makes sense, as she had re-read it and felt Baudelaire was bipolar. And then I gave it a second pass and found myself laughing openly by the end. He wakes up bummed and is driven to wreck a rando’s shit, at which he’s tremendously successful and his conclusion is: yup, it ruled.
Posted on August 14, 2018August 14, 2018 by fmchubs 0

It was useless to try to do anything. One could only watch the extraordinary efforts made by those tiny legs against an oncoming doom which could, had it chosen, have submerged an entire city, not merely a city, but masses of human beings; nothing, I knew, had any chance against death. Nevertheless after a pause of exhaustion the legs fluttered again. It was superb this last protest, and so frantic that he succeeded at last in righting himself.

The body relaxed, and instantly grew stiff. The struggle was over. The insignificant little creature now knew death. As I looked at the dead moth, this minute wayside triumph of so great a force over so mean an antagonist filled me with wonder. Just as life had been strange a few minutes before, so death was now as strange. The moth having righted himself now lay most decently and uncomplainingly composed. O yes, he seemed to say, death is stronger than I am.

I first read this essay in 2011. It made no impression on me then, but upon re-reading just now I found myself laughing–in awe of the moth, same as Woolf. Facing down the thanatotic city-swallower, and righting himself with dignity. “O yes!” Would that we could all do the same!

Along similar lines, I’m so pleased that I’m different from my 21 year-old self. We don’t often get guarantees, but revisiting art allows us moments like this.

“I can’t recalled how many buttcheeks and fronts I rubbed,” a “FAN” of Tropical 128 wrote on Yelp, about a January evening at the establishment. Some of those cheeks belonged to “hot chicks which was okay I guess.” Other cheeks impressed him less.

From this New Yorker blurb about my favorite bar in New York City. Ah, man, this takes me back. Er, uh– front? Hm.

“Well,” my doctor said, “these kinds of tumors are usually noncancerous. And they grow very slowly, so in six months or so, we’ll do another MRI. Don’t worry. You’re going to be okay.”

“What about my hearing?” I asked.

“We don’t know what might be causing the hearing loss, but you should start a course of Prednisone, the steroid, just to go with the odds. Your deafness might lessen if left alone, but we’ve had success with the steroids in bringing back hearing. There are side effects, like insomnia, weight gain, night sweats, and depression.”

“Oh, boy,” I said. “Those side effects might make up most of my personality already. Will the ‘roids also make me quick to pass judgment? And I’ve always wish I had a dozen more skin tags and moles.”

I wanted to throw my phone into a wall but I said good-bye instead and glared at the tumorless people and their pretty tumorless heads.

I’d never read anything by Alexie until this essay and, I gotta say, I think I’d cope with a diagnosis somewhat similarly. Looking forward to learning how else we might align.