Sometimes a lyric video serves well enough as a real, actual music video. And sometimes an interloper jizzes all over your test patterns.

my friends: “brian if you’re feeling restless you should try podcasts, it’s like having funny coworkers”

me: *turns on 9/11 episode of Last Podcast On The Left, stares into middle distance for much of the workday, broken*

my friends: “brian are you familiar with white noise”

Two weeks from now, I’m visiting New York for the first time in five years. I intend to make a solo trip to the National September 11 Memorial & Museum. Is it perverse to admit that I’m motivated by experiencing whatever feelings well up while standing on the site of a historic, globally-recognized atrocity? Not sure I’ve done any sightseeing at one of those before. Tourrerism.

Like James Gunn, I’ve attempted to be transgressive or provocative when I write jokes. I was also an edgy teen before that. There are too many posts for me to ever sanitize. “Rape” and “retarded” tossed around flippantly. The n-word spelled out to make (unnecessary) rhetorical points about censorship. Sure, sexually-tinged jokes at the expense of minors.

But I also can’t and won’t ever be the director of a globally-popular superhero movie series. I doubt I’ll be recognized at a county-wide level, unless I fall down some stairs in a particularly funny way. So, like, sorry you didn’t consider your trajectory, James, when you took some shots at social mores. Society likes to shoot back.

On the positive side of comedy, today the New York Times contains a profile of Hannah Gadsby. If you haven’t watched Nanette yet, do so. It didn’t rock my world, but I’m swamped in progressive comedy and I dwell on it often. (I think I was most tickled by her cerebral, historically-evidenced line of material on Van Gogh.) The show she’s created is important and it’s accessible. Hannah demands her humanity and succeeds.

Is the opposite of a red flag just a green flag? Why don’t we have a fair opposite to “red flag?”

I don’t think we talk about green flags enough. Because reluctance is a big part of conversations about dating, right? “Yeah, she seems cool, I guess. We’ll see where things go.” I think most of the time we’re falling in love with folks who are merely Okay, like they’re hot enough for you to fear losing them but they’re just generally Acceptable, and a big part of Accepting them is the comfort that they feel similarly about you. Then the red flags are the worst bits of them, the parts that make you say “what if he’s Unacceptable though?” Then—for fair, healthy reasons—they’re overlooked in the hopes that they aren’t planted too deep.

But shouldn’t love be about enjoying another person and then seizing onto the qualities that push them above and beyond? When I think of the women I’ve caught feelings for, it’s because I really like them, but then they’re also blowing my mind and making me laugh with these incidental phrases and body language and thoughts. Raising green flags left and right. Sure, shit may be unrequited, but I don’t really get bothered given that I’m excited to feel anything that shoots past my amiability toward all folks.

And dashing out “simultane story respo” off-the-cuff: massive green flag. I admit there’s probably some context missing, that you don’t know her personality and, even if you do know mine, you’ve got no idea how they interplay. Too bad; this is the most erogenous DM I’ve ever received.

From an album of piano ballads comes this incongruous rollicking romp through self-pity.

No, don’t tell me you’re sorry
You’re just sorry for yourself
And though you may seem fine alone
I wanna be the one to help
Posted on July 17, 2018 by fmchubs 0

Upsetting that I’m now the prime demo for The New Yorker but not quite as upsetting as Luke’s chill at the prospect. I mean, c’mon, that’s a big favor by Chewie.

I mean, c’mon, it’s just a slideshow of the most endearing sneer. I already featured this song in last month’s playlist, but you can’t hear cotton candy ombré, can you?

Back in college, during the heyday of this site, I was far more liable to track down music videos for my favorite songs. Over the past year I’ve realized that, even approaching 30 years old, it remains as much fun to watch them with friends and banter, jumping between recent faves without a through line beyond that.

As I fear I might become Mr. 10pm Bedtime myself, there are all these flickering reminders that I’m still enjoying the same conduct as Mr. 6am Bedtime. That, and the fact I can’t stop projecting perfection onto GIRLI. Grimes is dead, long live GIRLI and her dedication to the rumpus and her post-rave trash-fairy genius. I’m getting a magnetic labret to facilitate kissin’. 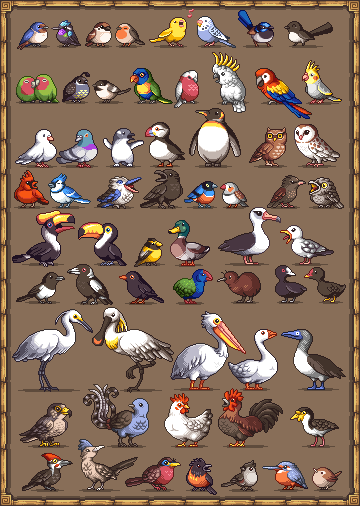 Tag yourself; I’m fourth row, far-right. (Kookaburra?) I must admit the cockatoo tempts.

This print and more can be bought here. Paul Robertson’s art, which has been featured innumerable times on this page, can be found here.