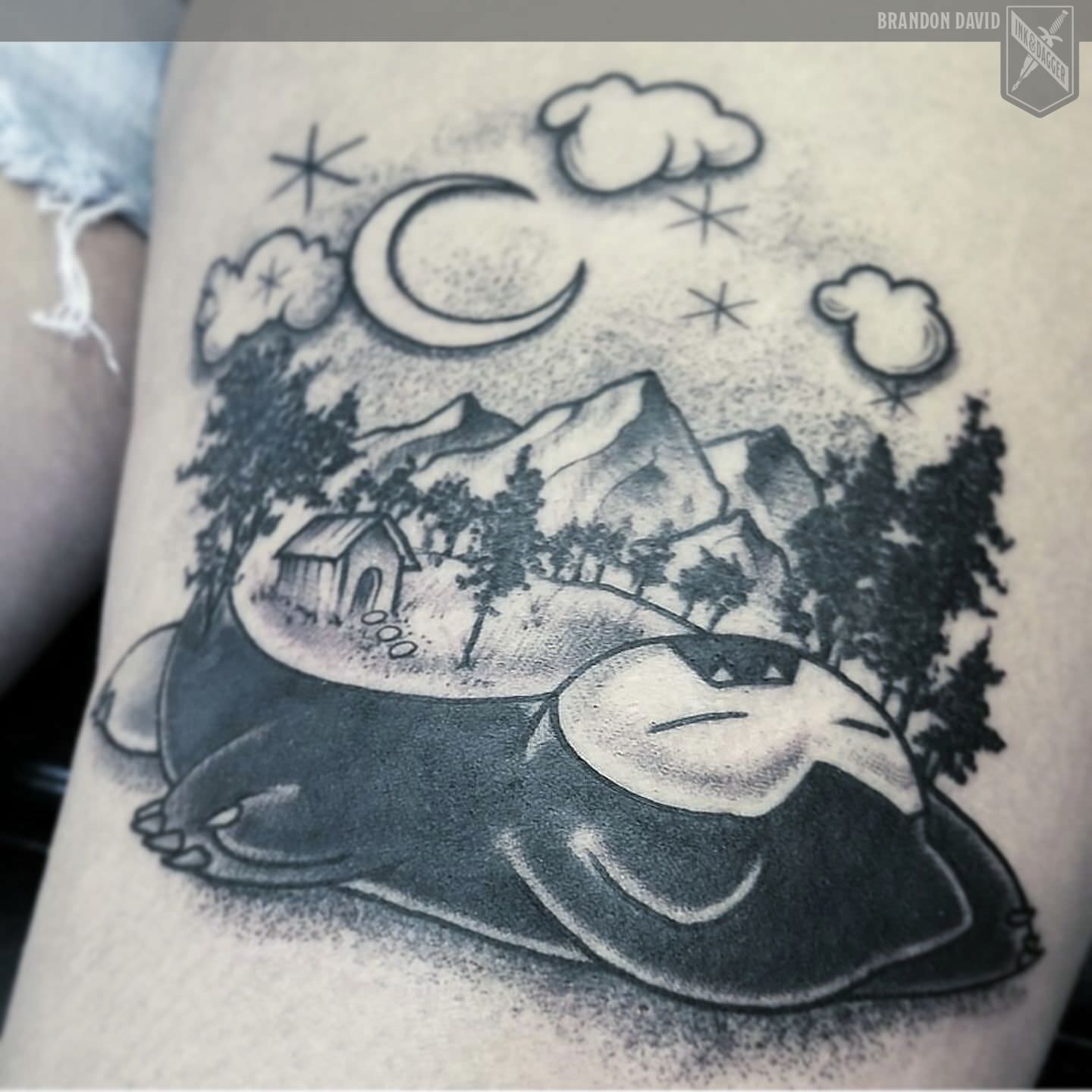 A tattoo I’m taken with by Brandon David from Ink & Dagger in Georgia.

This is what I think a tattoo should be. If it must include cultural bits & bobs like Snorlax, then do more then a facsimile. Make that Snorlax your Snorlax, because you’re you and you appreciate this world for different reasons than the person on the bus ogling your tight tat. I assume this one’s bearer loves the outdoors, and so we end up with the digital vs. the natural, the cartoonish vs. the realistic, sleep vs. activity– a universe borne on the tummy of a cute behemoth. What happens when he wakes?

Look at how much is going on in this tiny black-and-white tat!

With any luck, this will be a career someday.

Literally EVERY Pokemon character for your viewing and wearing pleasure. These little dudes are pretty freaking adorable and are sure to rustle up some hardcore childhood nostalgia.

I’m close to broke so it’s a slight consolation knowing that I would be broke if I was a young lady about town.

Lull me to sleep, longtime favorite Pokémon. Lull me like Rhydon claws on a chalkboard.

What if a Pokemon’s Cry was their Name

This is an answer to a question I didn’t know I had. I’ve always been partial to BLAUHHBRUUUBIIII (Chansey)

I decided to make custom R/B sprites for the current Twitch Plays Pokemon team! They’re transparent! Feel free to use them anywhere you like, you don’t have to credit, but it’d be really nice if you did. :>

The first round of Twitch Plays Pokemon wrapped up Friday night after 16 days of schizophrenic battling and songs of praise for the Helix Fossil. A lot of fan art was drawn up, but none better than this: a collection of sprites tailored specifically to the ‘mons used on the winning team and their crowd-sourced backstory. What most impresses me is the adherence to the style of the sprites in the first-gen games, which frequently looked cartoonish and disproportionate compared to the official art of the series. Can’t wait to see what springs from the mob’s playthrough of the 2nd Gen! (which, by my count, started about two hours ago?!?)

This is the future. I may just let this run for the next few days and see if it ever goes anywhere.